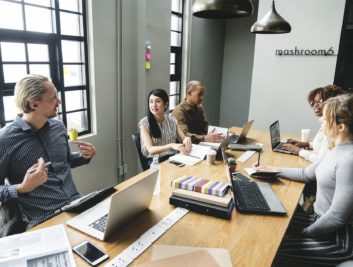 While a lot of attention has been devoted to characteristics of the Millennial employee, much less has been dedicated to the Millennial as a manager. According to the Pew Research Center's parameters, older Millennials are now in their mid- to late-30s, an age at which they are entering into management and leadership positions. The values and workstyle that Millennial managers bring to companies will have a noticeable effect on organizational culture in the coming decade, and identifying these characteristics can help companies effectively coach their Millennial managers to help them become strong leaders in the organization.

It’s all about teamwork.

The Millennial manager takes a team-centric approach and expects her direct reports to share ideas, collaborate and not be concerned about who gets the credit. She’s part of the “no person left behind” generation and has grown up taking part in sports and activities that emphasize participation and teambuilding, rather than pure competition. While other generations may have had similar experiences, Millennials value teamwork and seek the input and affirmation of others with much more frequency. She is also much more likely to provide daily feedback instead of annual reviews. Daily check-ins strengthen her relationship with her team and encourage two-way communication.

Hierarchy doesn’t matter, and the status quo can be challenged.

As is the case with Millennial employees, titles don’t matter to the Millennial manager. He is just as likely to walk into a CEO’s office to chat as he is to sit down with a colleague. The Millennial manager has grown up being included in decisions ranging from what the family is having for dinner to where they’re going for vacation. The use of first names is the rule and everyone is an equal. As a result, the Millennial leader will be perceived as more approachable, and “one of the team” rather than one who directs from afar.

You can also expect the Millennial manager to question the status quo, especially if he identifies areas where efficiency can be improved with technology or alternate workflows, or where contractors, rather than internal resources, can be used for their expertise.

We can build the plane while we’re flying it.

The Millennial manager’s enthusiasm is contagious. When she has an idea, she’s going to run with it, and she expects others to display the same positive attitude. Her generation is used to turning to online resources to find answers rather than relying on office veterans, and the Millennial manager has a tremendous amount of confidence in her ability to identify and overcome issues as they come up.

Employees used to formal, mapped-out workplans, however, may have a difficult time adjusting to this unstructured approach. Necessary resources may not be identified before a project takes off, and timetables may be unrealistic, leading to a perception of the Millennial manager as being overconfident.

Diversity is a beautiful thing.

The Millennial leader values diversity in all its forms, especially diversity of opinion. He is constantly on the lookout for people with different abilities, different perspectives and different skills. Just as challenging the status quo is viewed as a positive, the Millennial manager wants to capture—and capitalize on—great, unique ideas. He also values diversity of work and rewards his staff by providing opportunities to step across boundaries and expand their professional repertoires.

Technology is a part of everyday life.

The Millennial leader grew up with technology. She relies on emails rather than face-to-face conversations and expects that her emails will be read in full. She is also much more inclined to support telecommuting and look toward technology to make herself and her staff more effective. While technology brings plenty of advantages, the Millennial leader may be tempted to avoid face-to-face confrontation, preferring instead to rely on emails and texts to convey negative information.

Social good is in our DNA.

In addition to being keenly aware of his company’s corporate social responsibility efforts and reputation, the Millennial leader will seek out ways to get his team involved in social causes—and assume that they want to be involved. He may structure a team-building exercise around cooking for the underserved, helping to build a home for a family in need, or cleaning trash off the beach. He may even set aside a monthly “volunteering” day for his team’s participation. His goal is to lead transformation, both inside and outside of the company.

Not every Millennial manager will display all the characteristics listed. The closer one is to the intersection of two generations, the more likely one is to exhibit qualities from both. It’s also worth mentioning that each of these qualities can have both positive and negative outcomes. For example, while disregarding hierarchies may work well in “flat” organizations, Millennial leaders who eschew organizational chains of command may have a difficult time adjusting in “traditional” corporate environments. Similarly, one who focuses exclusively on teamwork may be blind to the value of an individual contributor.

Organizations can help Millennial leaders succeed by providing opportunities for senior managers to serve as mentors. As is the case with teamwork, Millennials have been raised to value the role that coaches, tutors and teachers have played in their lives. This new generation of leaders wants to be shown where they can go, what they can learn, and how their job is integral to the organization. They are not going to be satisfied with being a cog in the wheel; they want to know that what they're doing matters.